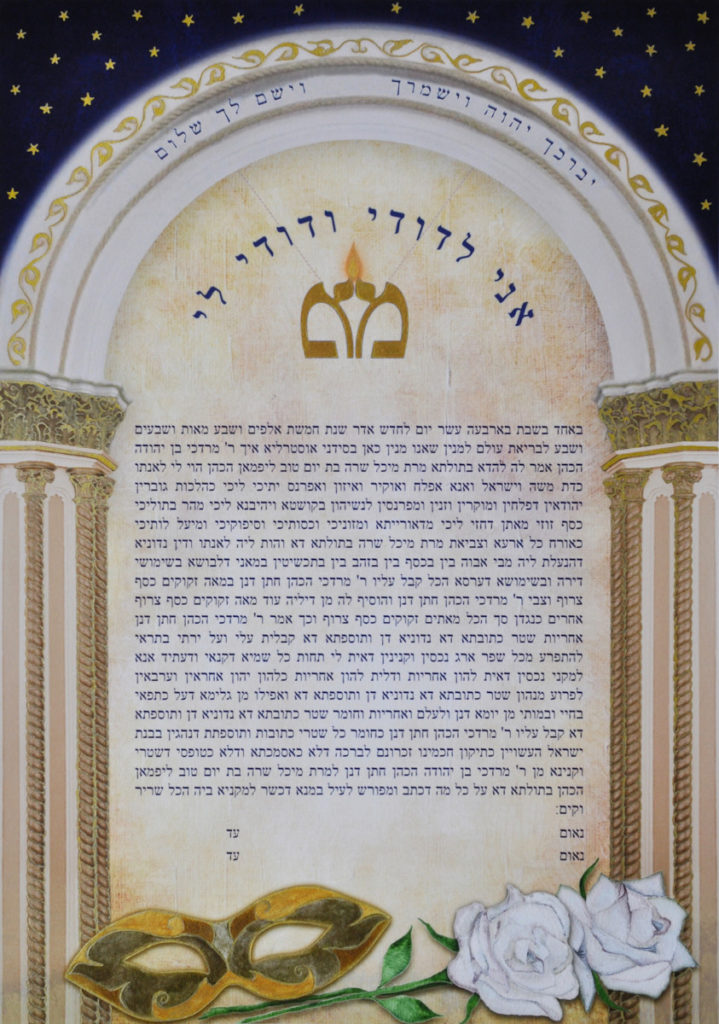 This Ketubah through its visual elements celebrates both the location where the couple married (here, the World Heritage listed timelessly beautiful Great Synagogue in Sydney) and the festival that back dropped the timing of the wedding (where the mask is a marker of Purim). 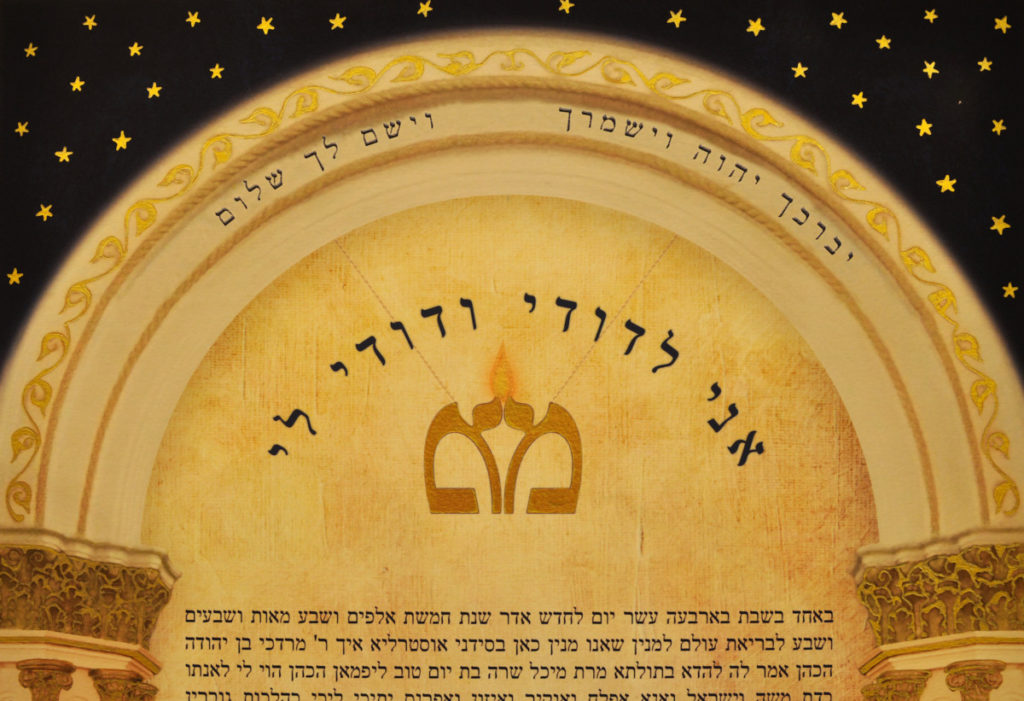 The Aaron Kodesh façade of the enchanting and ornamental Great Synagogue in Sydney frames the composition and both literally and metaphorically represents the roof under which the couple are to build a home, family and life together (analogous to the symbolism of the Chuppah). 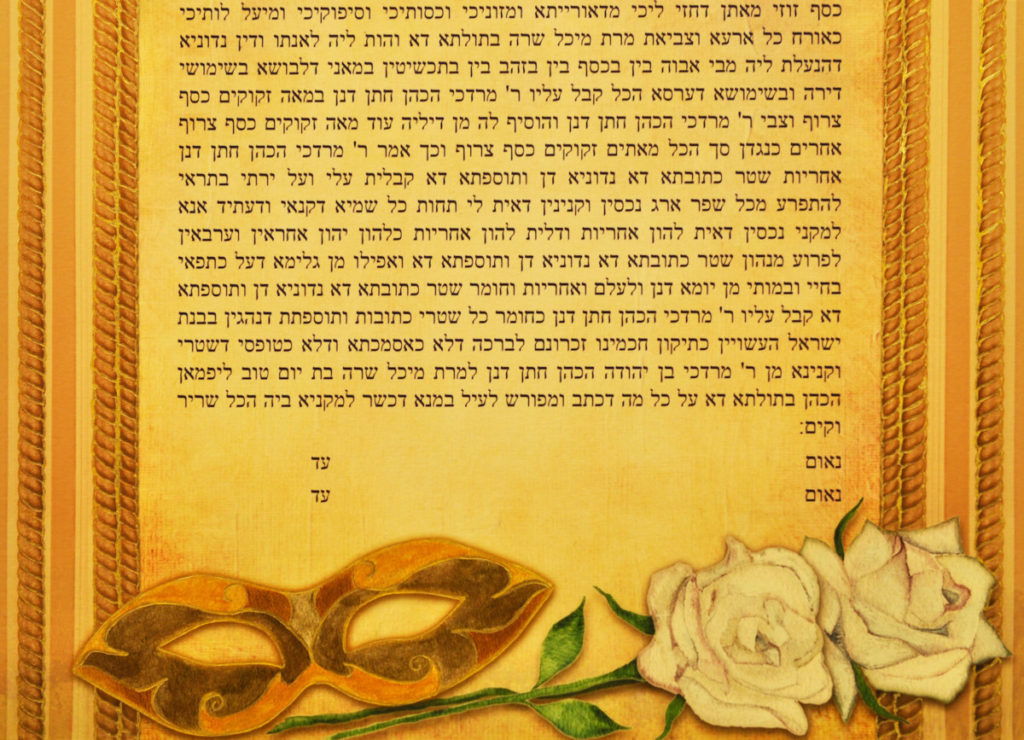 The still life beneath the text harnesses the mask as a signifier of the placement of the wedding in reference to the Jewish calender – falling the same weekend as Purim and in this way the Ketubah design celebrates the timing of the wedding in addition to the location. 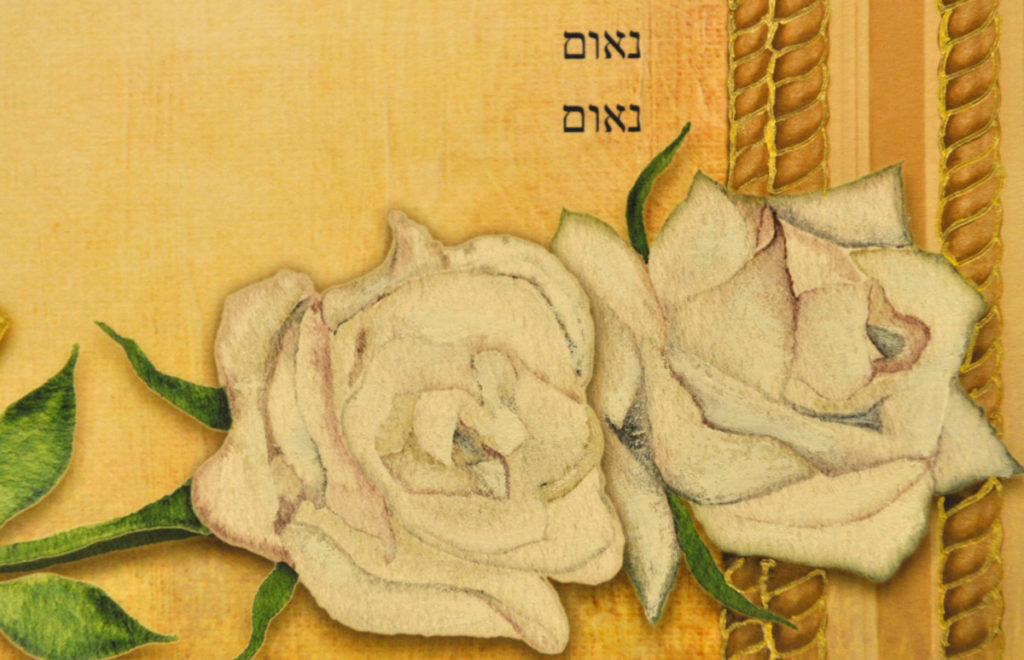 The two white roses symbolize the pairing and union of the two souls of the couple. 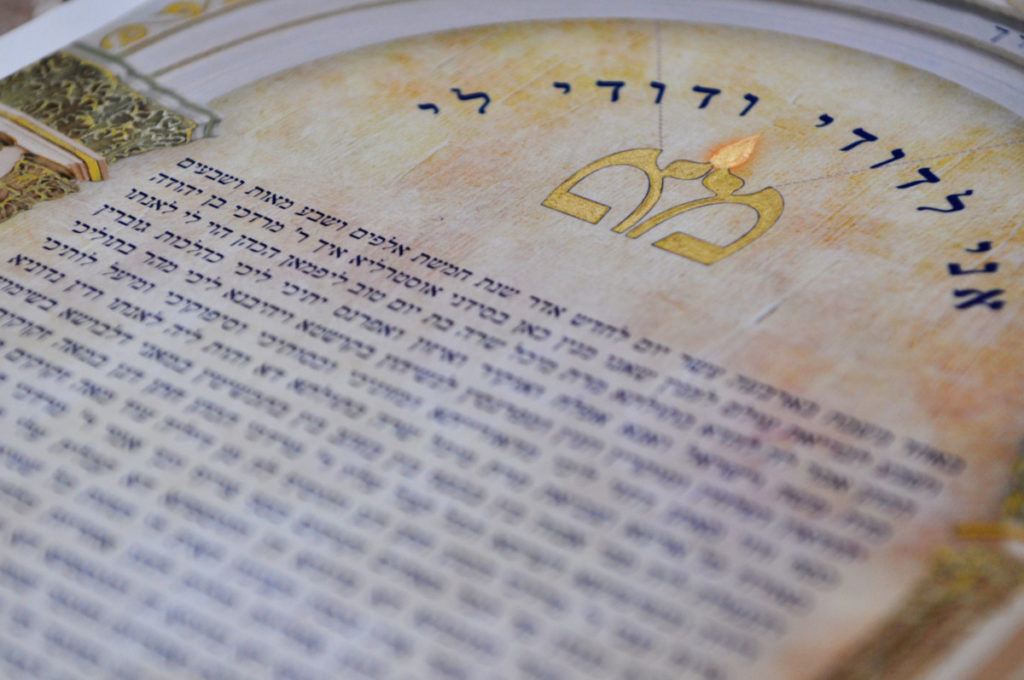 The architectural décor that characterizes the Synagogues visual signature has been preserved in this Ketubah in an ode to and celebration of the Synagogues magnificent opulence and timeless antiquity. 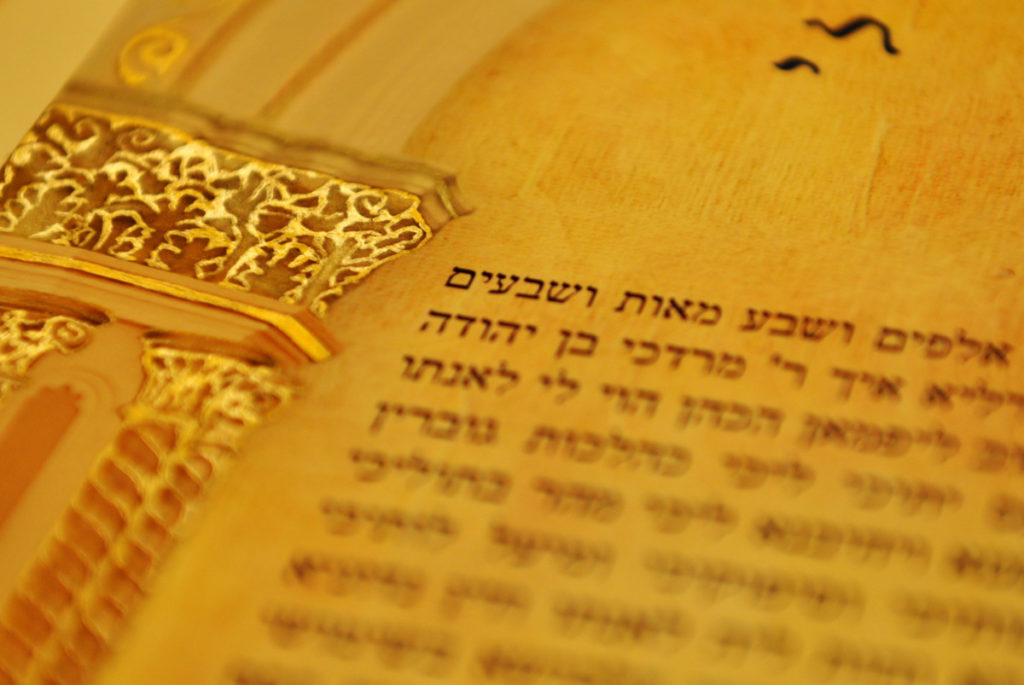 This intricate ornamentation has been further expressed through gold pigment accents that reflect and radiate fire in the light. 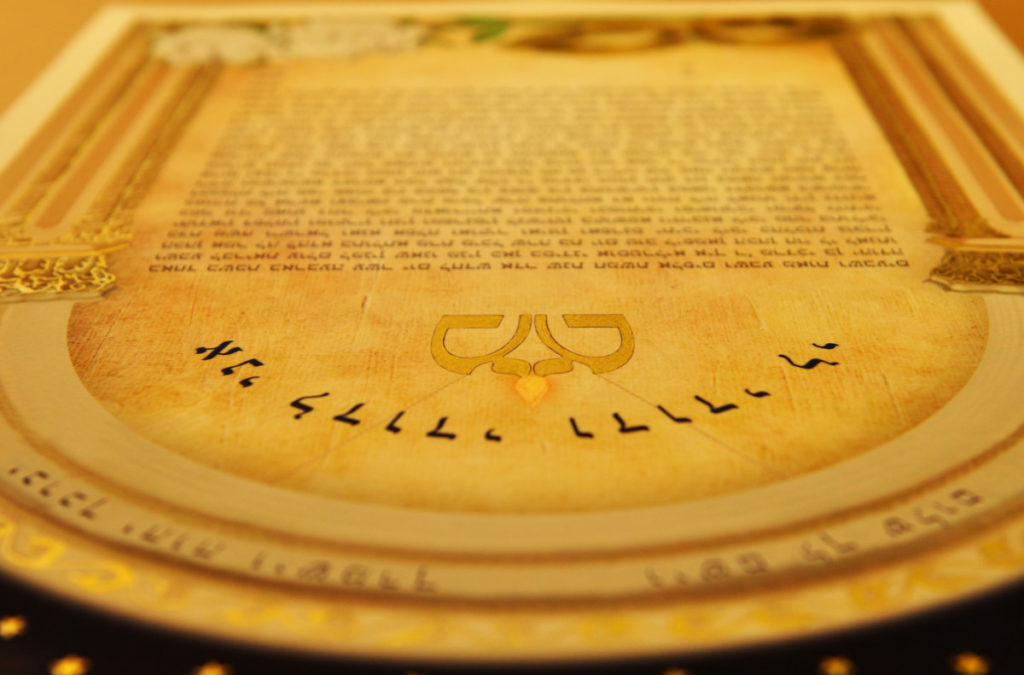 The star studded night sky dually connects to the painted starry ceiling of the synagogue itself, and embraces the wonder of Hashem’s creations, the cosmos and the wider permeations of nature and the universe into the composition. 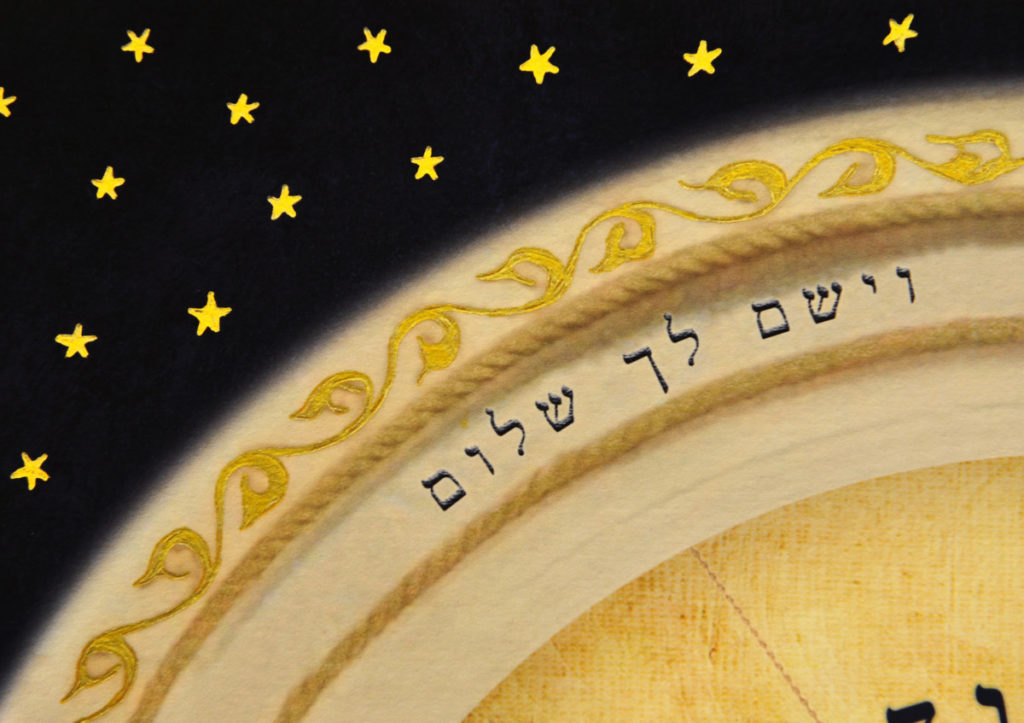 The inclusion of the first and last 4 words of Birkat Kohanim honours the couples’ shared ancestry of being amoungst the tribe of the Kohanim and sings of peace. 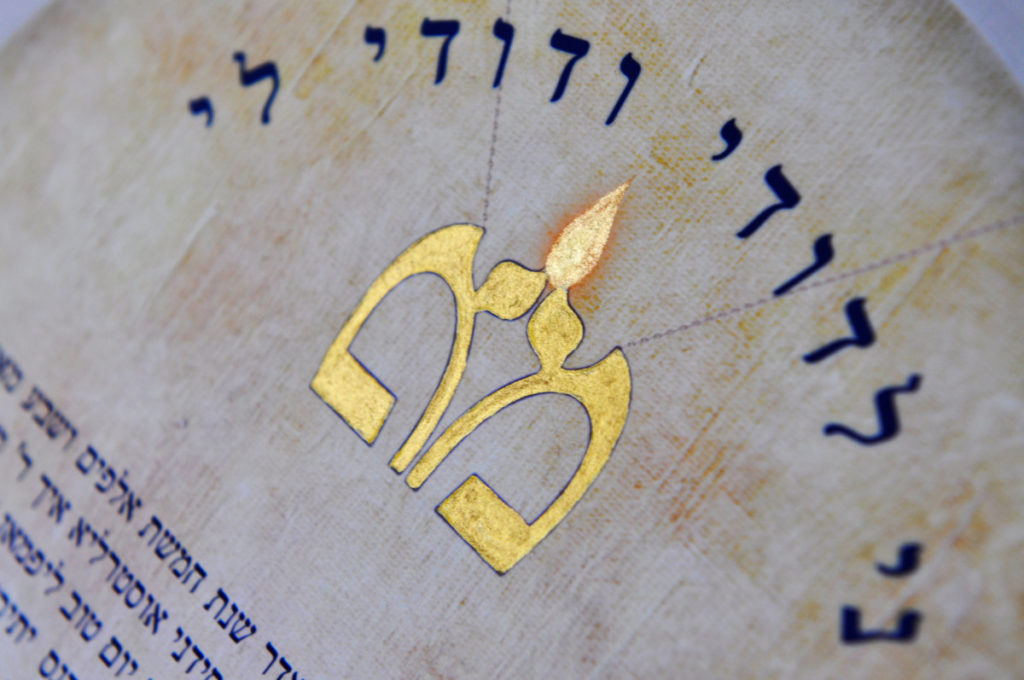 The symmetrical mirroring of the couple’s identical initials (ממ) was used to create the Nir Tamid, structurally suiting the synagogue visual framing as well as serving as a metaphor of the eternal light and burning flame of the couple’s love. 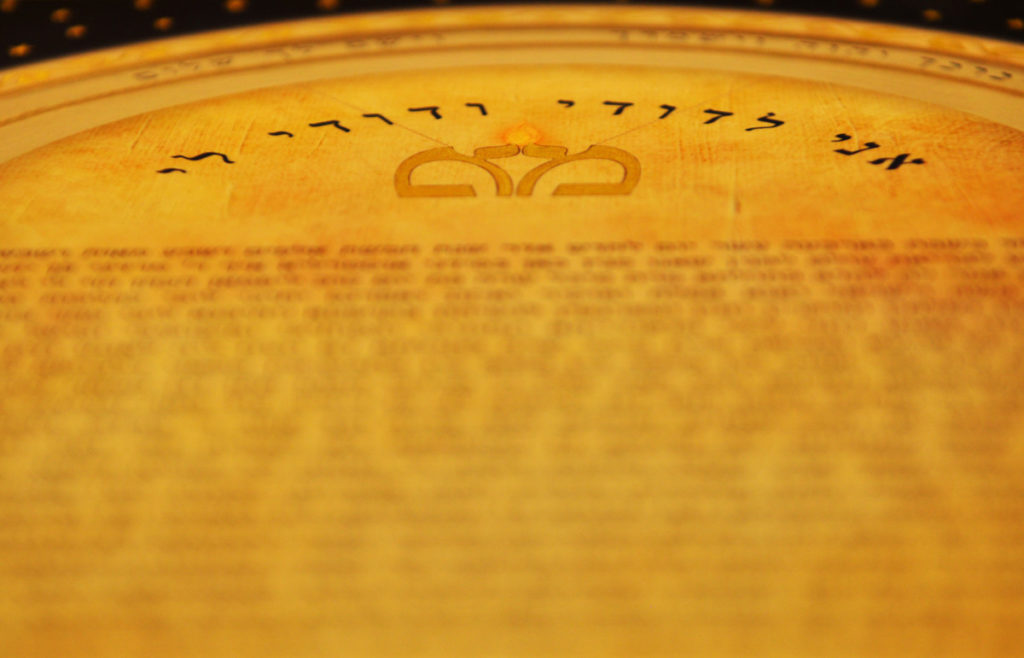 The text of the Ketubah floats upon an assemblage of line and parchment, which creates a textural background of related materiality. 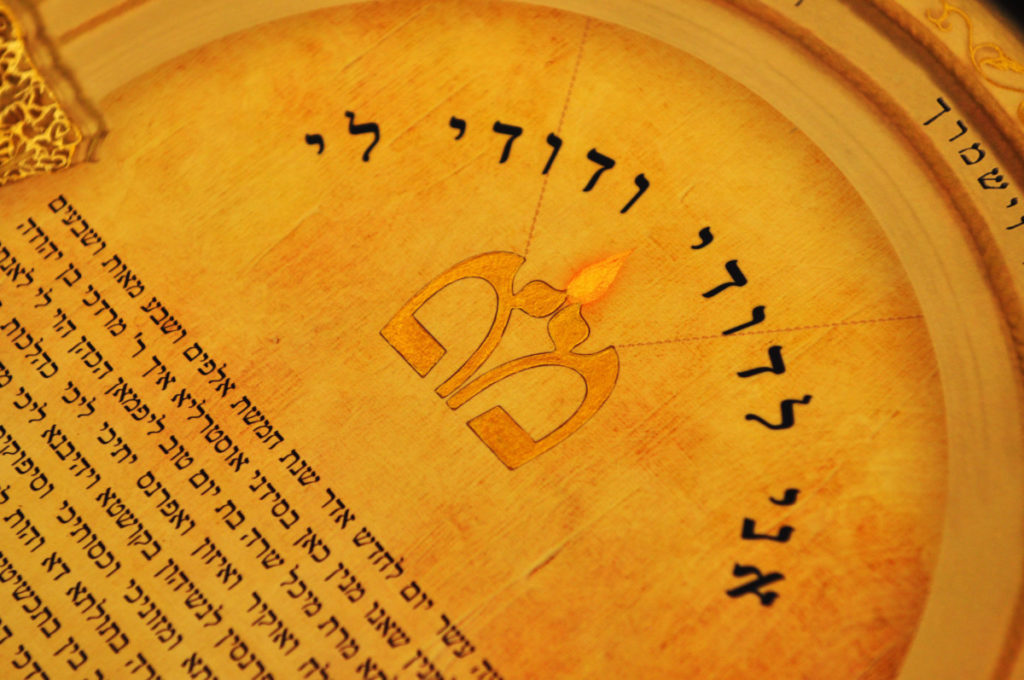 The hymn “אני לדודי ודודי לי – I am my Beloved’s and my Beloved is mine ” (Song of Songs – Shir HaShirim 6:3), a romantic declaration between husband and wife written by King Solomon wraps around the initials and mimics the geometric dome of the larger architectural frame. This psalm evokes the intrinsic commitment, care and responsibility mutually undertaken by husband and wife in their journey through life. 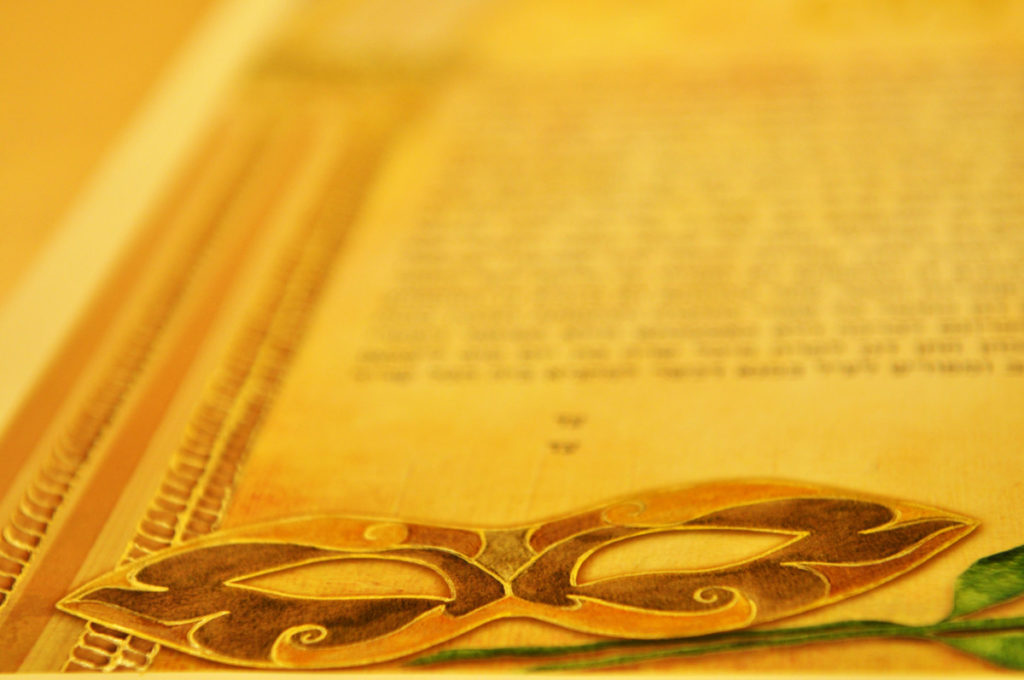 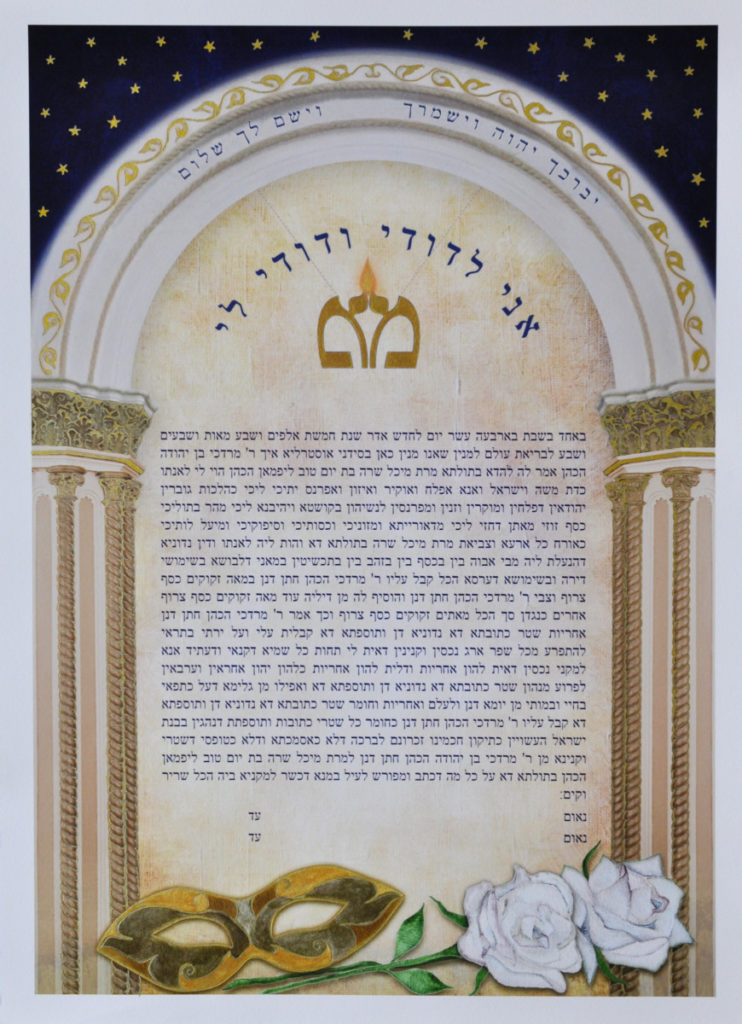